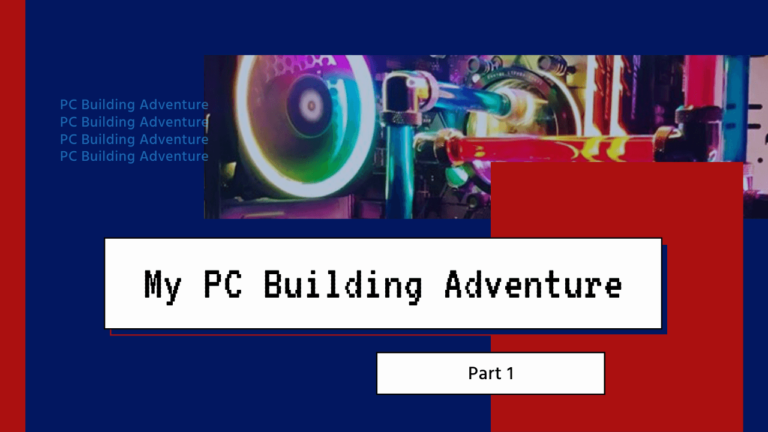 Ideally, a blog like this would have a title like How to Build a cheap PC in India or something catchy like that. I’m not gonna do that-let’s keep this casual. The story began when… wait wait wait. Let’s first get to know about what we are talking about.

You saw it coming-didn’t you? Here I am, finally talking about what went into the gaming PC that lies on my desk right now. The PC has been a great conversation starter and is the centerpiece of my room. You just can’t help but notice it!

This is my gaming PC that I built over last couple of years or so. You might have many questions in your mind right now. How come you have such a beautiful piece of electronics? What makes this story so unique that you want to share it?

We’ll get there eventually.

Just like any other kid doing Engineering in India, my parents bought me a laptop in my second year of Engineering-and the best part-I had the freedom to choose what I got. Going in with a practical approach, I went for the 14-inch HP x360 convertible 2-in-1 that had a touchscreen. No discrete graphics-no problems-or so I thought. I wasn’t going to able to game on it, and I didn’t intend to either. It’s portable, gets everything done quite well even today.

But the one thing it does not do well:  gaming. It’s just not built for it! I started playing FIFA 18 on its iGPU and man that was a headache and a half. It would heat up like a hotpot-you could literally cook on it. I wasn’t giving up. It’s not who I am.

I had been saving a very tiny amount of money from time to time. In vacations, I binge-watched LTT’s Scrapyard wars. All seven seasons. And I thought- if the crazy Linus could do it, why can’t I?

I started looking for very cheap computer parts in nearby areas. Hundreds of spooky web searches and hours of wandering in the city later, I got my first breakthrough.

On one of the sites designed to sell and buy used stuff, I saw an ad for an i3 2nd generation CPU and motherboard. The ad itself was terrible. The seller couldn’t even specify what it was, half of the words were spelt wrong. Luckily, the posting had a phone number. 10 minutes later, I was talking to that guy.

He worked at a scrapyard. They had many office computers ready to be salvaged, and he used to keep some of the parts that he thought were usable. I told him I wanted something like an i5 2nd or 3rd gen with a compatible motherboard and RAM. Rest I was hoping to get something somewhere else.

He asked me to come to his house. I went with one of my best friends-just so that if we get killed-I wouldn’t die alone. And boy that neighborhood was sketchy AF. He lived in a single room in a slum with his wife and 3 kids. He had a half false ceiling made out of wood where he kept all his ‘treasure’. He climbed up there and asked us to as well.

I am not exaggerating, but if I had jumped 1-feet standing on the wood ceiling, me, my friend and the man would have collapsed along with the ceiling. He fired up a monitor, attached a power supply to one of the motherboards and put a CPU in the socket in the third attempt. After trying for 15 minutes, he showed us the POST screen. The processor was i5-3470S and the Gigabyte motherboard had a H61 chipset, he offered 2x4GB DDR3 RAM with it. Not knowing what exactly I had bought and scared to death in the sketchiest environment I had ever been, I almost fled the place after paying him.

One mistake you should never make

Now I had the motherboard-CPU-RAM combo, but I needed the rest of the parts. I looked up on Amazon for power supplies and ordered the cheapest one I could find. It looked something like this:

Hands down I am not proud of myself for what I did. I made the biggest mistake you could make while building a PC and I should never have cheaped out on a power supply. It had no warranty, no efficiency certificate, and until I realized my mistake, I had a live bomb in my house.

The money I saved with cheaping out on the power supply, I spent on the graphic card and case. Once again, after going through hundreds of postings on different buy-sell websites and calling every person I thought had a graphic card to sell, I found one that fit my needs. I made a mistake there too-I bought a LP (Low Profile) card. It was a Zotac 1050 2GB OC LP. The main difference between an LP and normal card is that the LP card has a smaller bracket for it to fit into a slim PC. But LP cards can’t fit into a normal case!

The cabinet I ordered from Amazon-Circle CC821 Prime- got damaged in shipping. 2 of the 5 installed fans didn’t work on arrival, and the front panel was broken and just hanging off from the case.

I somehow managed to put it back together, with screws and glue. Eventually, Amazon provided a full refund without taking the case back. Free case! I bought an aftermarket cooler (Deepcool Alpha 7) as the previous seller didn’t give me any.

I know, I know, I am not proud of that cable management either.

I went to a couple of literal scrapyards to see if I could find some not-dead hard disks from salvage computers. And oh boy that was some fun.

With nothing to test if a hard drive was working, I kept on looking through piles and piles of e-waste. Luck strikes once again!

I found somewhat convincingly-usable hard disk in one of the e-waste recycle center that looked like this.

The Hard disk was detected-I used the hard disk from my laptop to boot first- but had only 600GB formatted. Rest was nowhere to be seen.

Luckily, I knew what was going on. I performed an extensive disk check on the drive, and to no-one’s surprise, it had a really bad sector. I opened the drive.

You read that right. Opened it.

I was as stupid as you are right now. Especially the guys that don’t know hard drives are not to be opened. Generally, for whatever reasons, if the hard disk has to be opened, it needs to be done in a vacuum chamber or special dust-free laboratories. The reason is pretty straightforward.

Miraculously though, it still works! Full 1TB of it is now usable. I am not proud to be running all my games off it, but I don’t have any options right now. Maybe I’ll buy one later. Oh, did I forget to mention that the hard disk from the pile of e-waste cost me less than a happy meal? Crazy!

I bought a 1600×900 Samsung monitor from a guy that didn’t need it anymore, and some pretty basic peripherals.

I couldn’t run the Windows 10 OS from my laptop HDD for any longer. I took the risk, and put the scrap hard disk as the primary boot drive. It worked! Although, there were many days in between where my morning would be like this.

When it worked, the setup looked something like this.

That’s the story of my life. Eventually, I would get to a point where I would think I am done, I’ll wake up the next day and push further.

As I said, we’ll get there. Eventually.

Read the next part here.