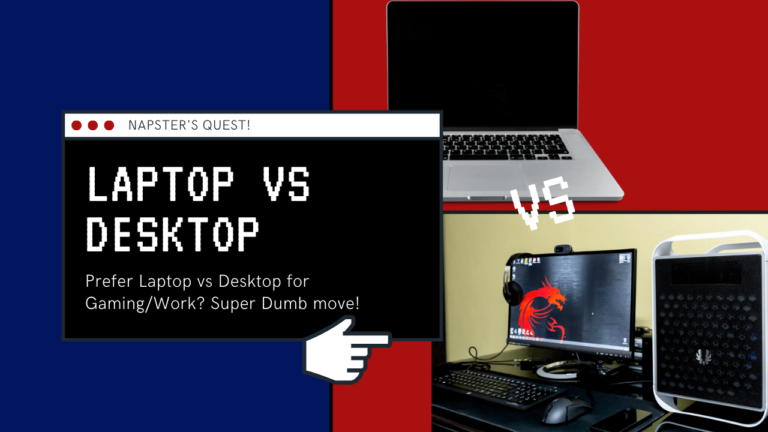 First up, let me get a few things clear. This Laptop vs Desktop debate is not meant to offend any cheapskate Indian gamers who love their gaming laptop, or professionals that are currently performing work from home. But then, why this post?

There are a few things that I have learnt about laptops vs desktops in last three years of tech adventure, that I want you to know.

There are many reasons desktop PCs have always been in demand even when the laptops are getting thinner and more power efficient. If you compare laptop vs desktop from even 3 years ago, you will be surprised how far we have come.

Having an SSD with a near-desktop-performance graphics and CPU in a laptop three years ago would have been a dream for anyone!

So then, why you can’t just get the best laptop you can for a given budget, and call it a day? Well, let’s shed some light onto the main talking points of the laptop vs desktop debate.

The most important component in any computer, whether it’s your portable and easy to carry laptop or the bulky and ugly desktop, is it’s central processor.

If you go through the specifications of the laptop you own, you will most likely find the processor name ends with a ‘U’ or ‘H’. In case you have a laptop with an Intel processor in it, the ‘U’ suffix stands for ‘Ultra Power Saving’. Meaning? Littlest performance, lowest power consumption.

Although this is great news for battery life, it is not so for performance. This also helps in keeping the laptop cooler, and we will see why this is so important.

Unfortunately, the same goes true for graphic cards. Even the latest GPUs of laptop lag behind their desktop counterparts, sometimes by a lot! Even if they get all power they need and they are cooled well, GPUs in laptop vs desktop GPUs are quite different in terms of performance and power draw.

Even if you equip your PC with the stock cooler and slam the cheapest fan onto the case, it will still be better than the cooling capabilities of any laptop with similar or even higher price tag.

The laptops are getting thinner, and there is even smaller room for heatsinks and fans inside. It is just not physically possible for any laptop manufacturer to have ample cooling for higher performance components!

Remember: ALL of the power consumed by your laptop, apart from light emitted by display, is converted into heat!

This is fairly obvious and straightforward. Most of the components like the motherboard, CPU, GPU and sometimes even RAM on Laptops is not replaceable or upgradable. You need to replace everything!

On the other hand, most of these components can easily be swapped out and replaced by the user. This makes the desktop easy to service and upgrade.

To simplify what I want to say, I decided to take a real-life examples to better describe.

I decided to pick the best bang-for-the-buck laptop in at a price point of 75000, and take it to battle with a balanced desktop that cost nearly the same.

Now, as the laptop already comes equipped with a display and keyboard, we will try to include them in the desktop pricing.

I have put all the components that do not affect performance still neck-to-neck. Sure, I could have gone with 16GB RAM but you can upgrade RAM on Laptop for similar price difference. Also, the motherboard on the Desktop has WiFi so no difference there too!

One side note: The Asus Laptop mentioned here is one of the best laptops for the money. It has almost 700 reviews on amazon.in itself, and it was launched less than a year ago.

Now that we have our competitors locked and loaded, let’s compare the CPU and GPU performance.

The Ryzen 5 3550H on our Asus Laptop and the Ryzen 5 3500 on the Desktop sound quite similar, thanks to marketing team being fairly obvious there. But does the similarity in name correspond to similar performance?

The Desktop processor wins by +42%! And I am not even surprised. The Quad Core 3550H was going to have a lot of trouble keeping up with the Hexa-Core Desktop 3500. Better yet, you can overclock the 3500 to get even better performance (Not much but still)!

It’s notable that we could get a 1650 Super instead of the 1650 in the laptop (Which still is a mobile GPU, not desktop 1650). I think you can see where this is going. Let’s head to gpu.userbenchmark to confirm!

Remember, I don’t make the rules here. This data is based upon thousands of benchmarks run on different desktops and laptops with verified component.

This is comparison of a discrete GPU vs discrete GPU. If your laptop has graphic cards like MX130, MX150, Nvidia 930,940,950 M/MX series or Intel HD graphics (lol), I don’t know what to say. They are good placeholders, can’t get any work done.

Why Desktop Isn’t The Ultimate Solution Either

Even though this comparison has led us to understand how much performance difference we lose if we chose to buy a laptop instead of a desktop, it doesn’t necessarily mean a desktop should be a better option in every case!

One of the main (and sometimes the only) reason why people prefer laptops over desktops is because of how easy they are to take with you wherever you go.

But you have to practically think if that is the deal-breaker for you. If you are going to use it all day on your desk at home and casually take it with you to office/college, will you still give up that much performance? I definitely won’t.

But, if you are a frequent traveler and work on-the-go, desktop won’t be of any help to you. You shouldn’t buy bulky gaming laptops either, I would suggest getting a lightweight portable laptop and a desktop both!

In case all you use your laptop for is binge-watching Netflix or browsing Facebook, you are reading the wrong article. Didn’t the title say for Gaming/Work?

But in case your work only includes working on spreadsheets or documents, lightweight IDEs or web-based tools, you definitely don’t need much horsepower. Just use a lightweight laptop with a good display and SSD and you will be fine!

The laptop vs desktop debate has been going on forever and will go on long after this article.

But one thing is for sure, if you care about where you spend your money and what you get for it, you certainly learned a lot today.