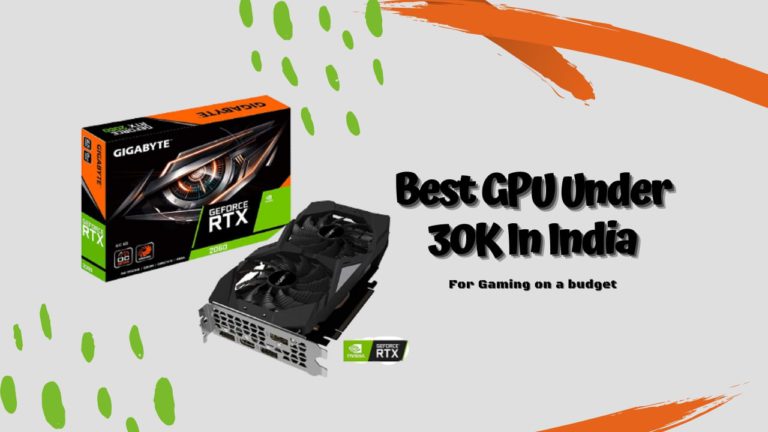 If you are one aspiring gamer with a budget of ₹70-80K for your next gaming PC build, you would wonder what GPU would suit most of your gaming needs, and give you the best price to performance for under ₹ 30,000?

Today, I will try my best to answer this very simple yet confusing question : Which is the best GPU under 30K in India?

Also, as the next-gen Ampere-based RTX 3000 series GPUs from Nvidia and RDNA2 graphics cards from AMD are set to be available in India in the next few months, there are a lot of deals to be had. So keep checking this space as I will be sure to update it.

The competition is always great for the customers.

Now, let’s check offerings from both AMD and Nvidia for the best GPU under 30K.

Out of all the graphics card available from both AMD and Nvidia, the best GPU under 30K is hands down, the Gigabyte GeForce RTX 2060 OC 6GB.

Will this change if and when the RTX 3060 launches? I don’t know. But for now, you can get pretty good deals on the RTX 2060’s and this one with 2X Windforce 90mm fans is one of the best for the money.

For the price, I am sure that you are getting way more performance than any other GPU on this list. If your budget is ₹30,000 and nothing more, don’t waste your time in looking for options as the best GPU under 30K in India, and just buy this one. It’s worth it.

If you are a gamer on a budget and can’t spend the full budget for the best GPU under 30K, then the GTX 1660 Super’s aren’t a bad value for you at all.

The GTX 1660 Super we looked at was the Zotac Gaming GeForce GTX 1660 Super Twin Fan. It is very well priced, and 2+3 years of extended warranty is an added bonus for sure. The card performs like your expectations, and if you are playing E-Sports titles or games that don’t require much horsepower at 1080p, a GTX 1660 Super would suffice you for days.

Check out other options for best GPU for 20000 in India here: https://napstersquest.com/best-gpu-under-20k-india-2020/

For the little price over the GTX 1660 Super, the 1660 Ti nails the price to performance in the best GPU under 30K list. We looked at the ZOTAC GTX 1660Ti Twin Fan 6GB and the for the performance improvements over the super version, it’s totally worth spending the extra money if you can afford it.

For indian market, the AMD RX 5000 Series GPUs were a disappointment. From limited supply to insanely high pricing, they just didn’t make the cut to be featured in the list of the best GPU under 30K!

One such GPU with so much potential but that failed to deliver the price to performance you look for, is the RX 5600XT. Unless you get a very good deal and manage to buy it at around 25K, just don’t bother with AMD graphics card at this price point.

The cheapest 5600XT found at the time of writing was the Gigabyte RX 5600 XT 6G with Windforce 3X Cooling System.

And you are right. If you have the budget, then definitely go for the RTX 2060 from Zotac or Inno3D after comparing their reviews, prices and availability.

If ₹30,000 is your hard limit and want to spend that much money for a graphic card, then without a doubt, the best GPU under 30K is the Gigabyte GeForce RTX 2060 OC 6GB. It has enough VRAM that it will not bottleneck any games. For 1080p gaming on high settings and good framerates, it is pretty fascinating that we can get such great performance at just one tick over the entry level gaming price point.